Here you are on a rainy afternoon. You’re standing around a pool table with some friends, wondering what are some types of pool games you can play. You could play American 8-ball. That’s a well-loved classic. But what are some other games you could try?

If you want to be the hero of the afternoon, you could teach your friends a couple of different types of pool games. Some require deep concentration and a winner-take-all approach. Meanwhile, others are fun and require more laughter than skill. What you choose is all up to you!

But before you dive in, you should at least know the basics that every billiard game shares. 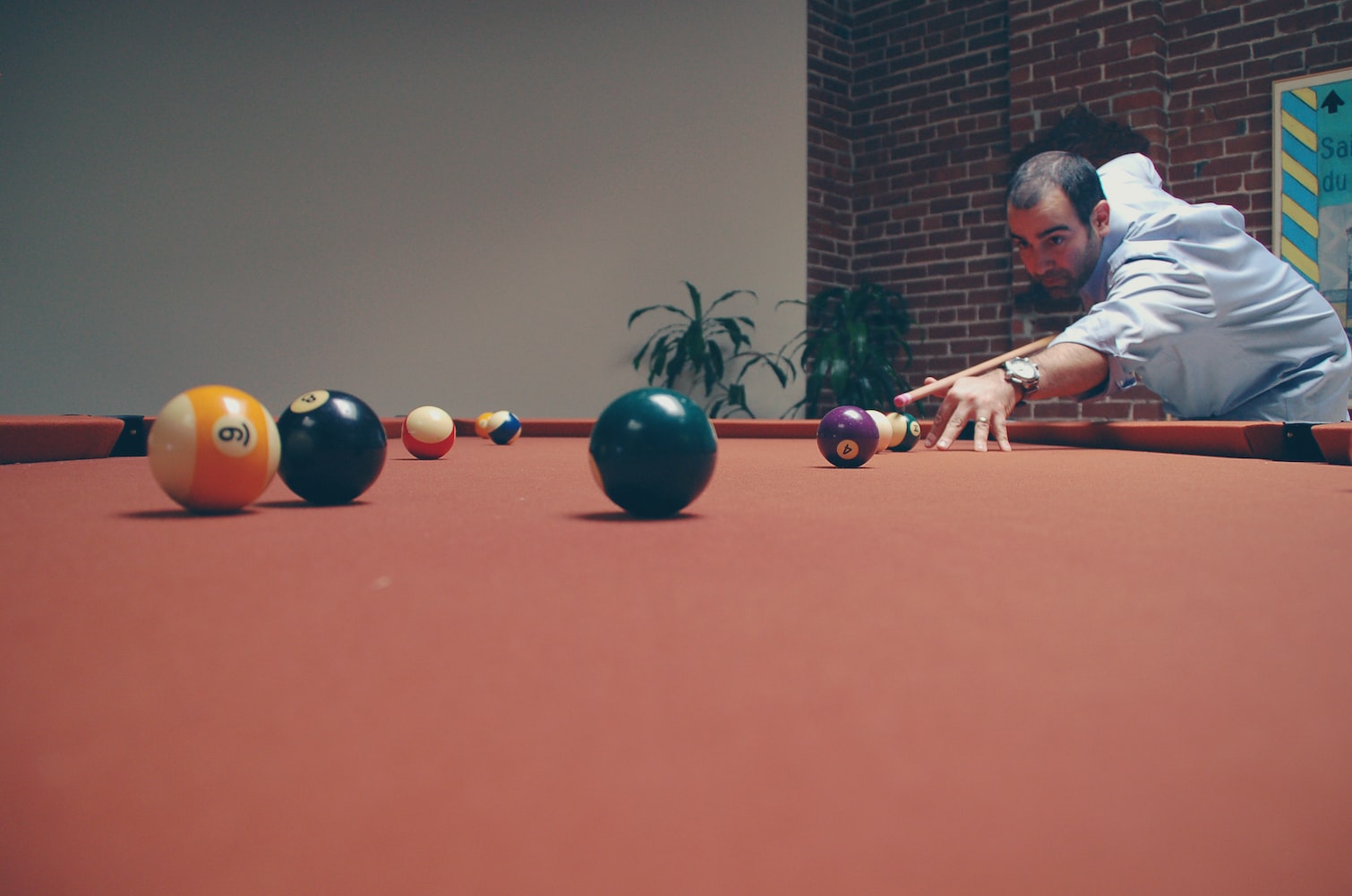 Although you probably know most of the basics when it comes to pool, some games require different tools. For instance, Pool Golf requires colored snooker balls rather than numbered balls. But there’s more to it than just gear.

Of course, we’re assuming that you have a billiard table already. Also, if you have a racking triangle, that’s even better.

You can find everything you need with the Betterline Billiard Balls set. It includes a set of numbered 8-ball pool balls, a triangle rack and a diamond rack, five chalk cubes, and two spot-stickers. You can’t go wrong with this set.

But there’s some additional gear you’ll need if you’re going to play some of the zanier types of pool games. For instance, bumper pool requires a series of obstacles. If they’re rubberized that’s even better.

In addition to having the right gear for different types of pool games, you’ll also need to know how to shoot pool balls. Often you’ll see people whacking away at the cue ball, with little control over their cue or the direction of their shot.

For the purpose of smooth gaming, here are some pointers that will help you shoot better:

That may seem like a lot of information to take in. However, chances are that you probably already do most of those things when you shoot. Add a few more tips in, and you’re ready to enjoy many different types of pool games.

How We Came Up With These Games 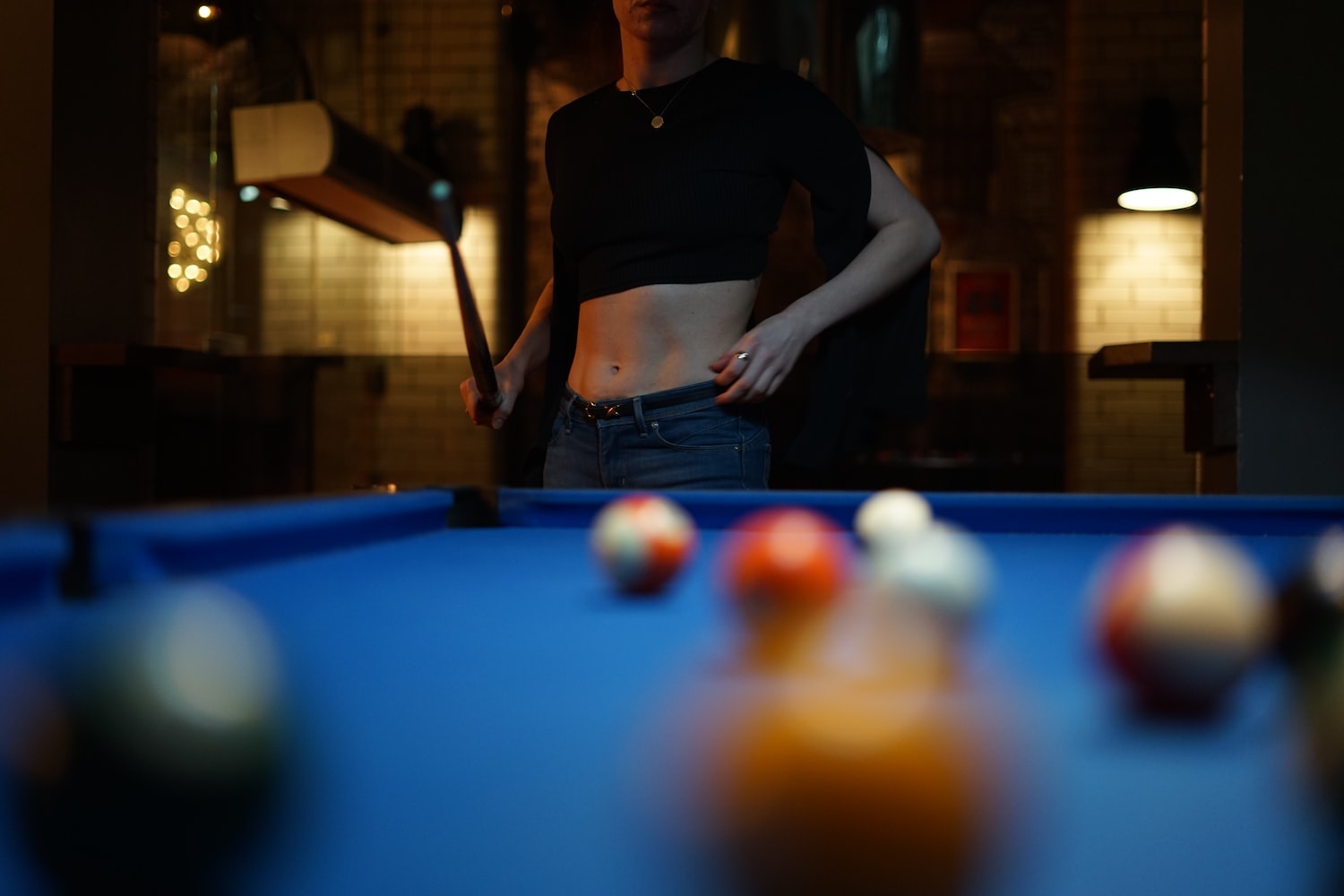 By now you’re probably wondering how on earth we came up with five different types of pool games. Our secret is rather simple.

First, we hit up the internet to see what was out there. It turns out that there are a lot of people with a lot of different pool games. For instance, we never would have known about Bumper Pool or Pool Golf were it not for the web.

Second, we used our own knowledge of different games. As an example, my two best buddies and I used to hang out at the local pool hall all the time. We played in tournaments together.

In fact, we were always together and people called us the “Three Amigos!” But there’s one problem with three people around one billiard table. Normal 8-ball rules don’t apply. So we learned to play Cutthroat.

No matter how many people are with you, we have a fun pool game you can try. Coming up with these five different types of pool games was actually really fun. In the hope that you’ll have a blast and pass on a new game (or more) to others, we’ve listed these games in no particular order.

One of the most popular types of pool games is the one that you’re probably already familiar with. Classic 8-ball, also known as American 8-ball, is the most popular billiard game in the world. You know the one.

Specifically, you have 15 balls. Seven of them are striped and seven are solid, and there’s a solid black 8-ball. You need to sink all your balls before you sink the 8-ball. If you sink the 8-ball while you still have balls on the table, you lose. Truly, it’s a simple game. But there are several little rules that not many people are aware of.

To start, you need to rack the balls in the triangle rack. The 8-ball goes in the middle. Also, you should arrange the balls so that there is one solid in one corner, and one stripe in the other corner.

Next, you need to flip a coin to determine who breaks. The winner places the white cue ball anywhere in “the kitchen,” which is that line across the top end of the pool table.

The break has to either sink one ball (not the 8-ball) or drive a minimum of four balls to the rail. If the shooter accomplishes either of these things, they can continue by taking another shot. However, if they failed, then it’s considered a foul break.

That means their opponent can choose to either shoot using the balls where they lie, or rerack the balls and attempt a break.

If the 8-ball is pocketed on the break, it gets pulled back up and placed on the center dot. It’s considered a foul break.

Another often-overlooked rule in 8-ball is the need to call every shot. If you don’t sink the ball you called in the pocket you called, it’s considered an “illegal” shot and your turn is over.

Finally, if the 8-ball gets jumped off the table, you lose.

Another one of these fun types of pool games is Straight Pool. You might find that classic 8-ball has too many rules. Maybe you just want to sink balls.

In that case, Straight Pool is for you!

The object of the game is to sink as many balls as possible. Each ball you sink is worth one point. It doesn’t matter what number they are, or what color. Just sink balls.

Racking is really simple. Place the balls in the triangle in any order. It doesn’t matter, because they’re all worth one point.

Flip a coin to break, and then the shooter breaks. If you sink a ball, great! You get a point and get to shoot again. If nothing gets pocketed, the next person gets to take a shot.

Every time you sink a ball, you get to shoot again. The moment you miss a shot, your opponent can shoot.

But there are a few things to remember in Straight Pool. The first is that you need to determine how many points you’re playing to. Most people go for 50, or 100. This means you may end up racking the balls a few times, so if that’s going to cost you money, you may want to avoid it.

Also, you’ll need someone to keep score. After you’ve sunk 20 balls, it can get a bit confusing.

Next is a fantastic (and vicious) three-player game. Unlike most other types of pool games, the object of Cutthroat is to keep as many of your balls on the table as possible. You want to sink your opponent’s balls and be the last person standing, so to speak.

For starters, there are three ranges of numbers. One to five, six to ten, and eleven to fifteen. Everyone will have their own range, which is determined by sinking balls.

Rack and break the balls like in normal 8-ball. The moment somebody sinks their first ball, look at the number on it. That will determine their number range. Pull the ball back up and put in the center dot. The next person to sink a ball will do the same, and whatever number range is left goes to the third player.

To play, you want to sink all of your opponent’s balls. Remember that they’re going to be trying to sink yours! The winner is the last person with balls on the table.

The next great game on our list is another fun one you can play with multiple people. In fact, you can play with up to 15 players! That’s because each player only gets one ball. That’s their ball for the entire game. Just like in real golf, the object of the game is to sink their ball in each pocket in turn. The first person to hit all three pockets with the lowest number of shots wins.

Assign a number to each pocket, from one to six. Then, try to sink your ball in hole one, followed by hole two, etc. When you miss a shot, leave your ball where it is and let the next player shoot. Record how many shots it takes you to sink your ball.

Once everyone has sunk their ball in every hole, tally up the shots. The person with the lowest attempts is the winner, just like in golf!

Because you don’t need numbered balls, feel free to use snooker balls like these Billiard Depot 2 1/16-inch snooker balls.

Finally, we have a game that will bring out the child in everyone. Bumper pool is like one of those 70’s pinball machines. You’ll place a series of obstacles on the pool table, and laugh as everyone attempts to pocket balls around them. Everyone gets five balls, and the winner is the first person to pocket all five of them. To keep it simple you can use official Action Bumper Pool balls.

Place the obstacles mostly in the center of the table, and add a couple to the flanks of the pockets (don’t block the pockets, silly). There is no cue ball involved. Instead, players take turns directly firing their balls at a pocket. But it’s not so easy, thanks to all those obstacles. Stuff bounces around quite a bit, so good luck!

Remember To Have Fun!

Lastly, remember that the purpose of all of these types of pool games is to have fun. Don’t fret too much about the rules. Instead, go and shoot some pool!

Do you know any fun types of pool games you want to share? Let us know in the comments. We love learning new games!

How to Play Snooker: 5 Rules You Need to Know Before You Start

How To Clean Pool Table Felt The Quick And Easy Way